After two weekends helping with the Poppy Appeal for the Royal British Legion at B&Q Cannock, this weekend the group attended the Remembrance Parade in Cheslyn Hay.  The parade set off from the Village Hall, Pinfold Lane, Cheslyn Hay heading to the Cenotaph at the top of Station Street.  The weather stayed dry, which is always a bonus on days like today as the group were all dressed in full uniform with their Poppy Neckers.  After the two minutes silence, the wreaths were placed at the Cenotaph, by members of the Armed Forces, Police, Councillors, Local Groups & Local Businesses, where then the Salem Church opened there doors for the Remembrance Service.

It was announced that last year the Royal British Legion raised a total of £20,000 for the Poppy Appeal in the Cheslyn Hay area, which is a fantastic achievement for the area. 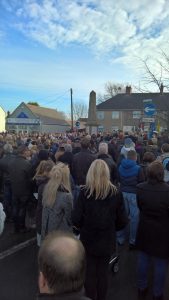